Getting back in salty water have been one of our main goals since we came back to Sweden. When the boat was ready to rock we said goodbye to Södertälje and called on the bridge-master to open the gates. Since we are raging more than fifteen meters over water-level the bridge had to be opened. We then entered the single lock that lowered us 0.7 meters down and released us to the same water touching all the worlds oceans. 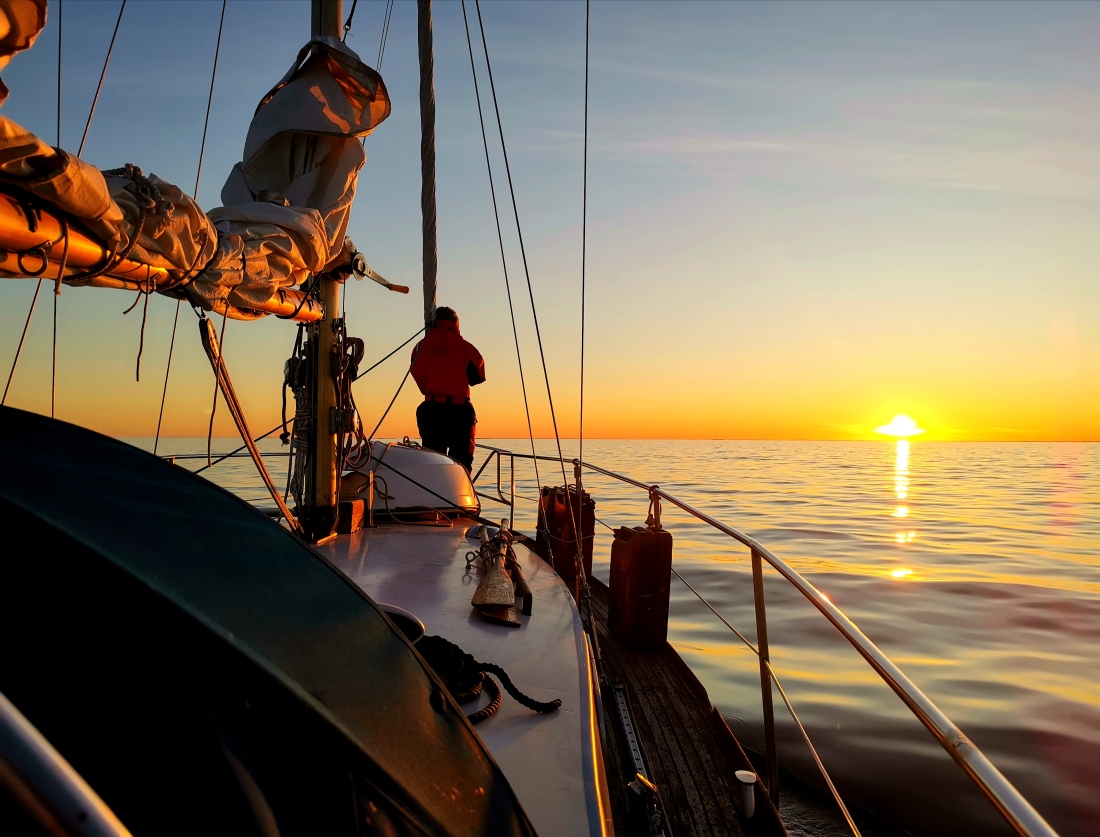 It still took us about 4 hours to exit the long arm of a fjord leading out to the Baltic sea. But it was an amazing ride. The weather was magnificent, spoiling us with a 19 degree, sunny breeze. This might be the warmest day we’ll see of Scandinavia in 2019. Since it was so calm we let the sail, engine and autopilot do most of the work onboard and we ended up sailing almost double the distance from our original plan. This took us to the small lighthouse island of Hävringe which up until 1986 served as a pilot station for ships trying to master the Swedish archipelago.

Maneuvering this part of the world is quite a task for any sailor out there. It is no way we would’ve followed the route we did if we didn’t have our digital equipment onboard, also we are getting quite familiar with this particular part of the coast. Not to forget that the weather this afternoon was just spectacular. There is shallows, islands and reefs just about everywhere you look and there is with no surprise you’ll find plenty of shipwrecks on the charts of these waters.

We had a great night after a long tiring day of sailing and were expecting some pretty good winds the following day. True enough, and as always with these two Captains set of on adventure there is always a steep learning curve.. The forecast said it would be cloudy and somewhere around 0.7 meters waves. True enough was it cloudy, but we got to test the ships abilities in double the wave-size and quite a bit of wind. It was awesome. Our goal was to reach the wharf where our previous ship is resting and awaiting a patient, caring and handy new owner. It is also where our journey southbound by boat ended about 11 months ago.

I must admit, it was quite a mess inside good old Harry Louella. We kind of lived onboard while it was hauled up on land awaiting our plans to come together back then. And the smell hadn’t changed a bit. Mostly diesel, but now also a pretty good stench of good old fashion mold after what must have been a pretty moist winter. Other than now also being in need of a complete change of curtains, mattresses and pillows she was in pretty good shape and I’m sure any potential owner will be thriller to take her on as a new project.

We spent a couple of hours cleaning out our salvageable belongings, it did after all almost sink twice, so things like books and some electrical stuff and tools and so on was nothing we would bring with us. Two things we really wanted was our solar panel and the weather station. Then of course there was our fishing gear and other items like spices, kitchen knives, the fly smacker and some other small things we even forgot we once possessed.

When all this was done and we had carried everything back to our new home, it took us a few minutes to get organized and then karma decided we needed a little kick in the ass. Since we haven’t been connected to shore-power since Västerås – the start-battery decided this would be a great time to flat out die on us. This mean we are now stuck on the same place as our beloved Harry Louella until people here come back to work tomorrow morning and can lend us a hand once again.

I don’t care any more. At least we get to sneak ourselves to a free night at a dock and won’t have to drop anchor in unfamiliar waters in the dark. We’ll deal with this mess tomorrow.