We spent a day in Södertälje. There was a couple of things in need of fixing before we could proceed through the locks into the salty waters of the Baltic sea. The crew, now very much out of shape after having spent ten months in the Maltese islands, was also ready for some good rest, an anchor-beer and a docking-day. We found a nice spot next to the coast guard station and figured no-one would bother or make us pay for our little stay there.

We are spending some time learning how to conserve electricity, water and heat onboard. We always have the option of running the engine for an hour – to charge the battery and to run the built in heater onboard. It use heat from the engine, but we are still working on how to cheapest and quickly heat up our home in the morning. Whenever connected to shore-power this isn’t an issue – but we have no plans of making too much use of the expensive marinas on our way.

We were basically just doing minor adjustments. The mainsail need to be re-threaded, it had probably been a while since it was taken down so some of the clips had come lose. The anchor needed to have a clip for easier use, the dinghy had to be tied down properly and the autopilot had to be tightened with a rubber-band to function without slack. Captain Simen also spent some time fixing the adjustment-stick for the heater. It was quite a task since the wooden box containing the heat-fan was last opened in 1996.

We also wanted to get back to our sweat-coin app that pay you for walking. So we have made some cash walking around the nice little city of Södertälje.

Located only 20 minutes with train from Stockholm it is a natural place to live for commuting workers who is not employed by the industry located in Södertälje itself. The City is however home to some huge factories like the one that make Scania trucks. It was established back in the 1300 era and is today one of two places where you can make use of the now expanding locks to the Baltic’s. It is also home to the Tom Tits Experiment, a fun little park with all sorts of stuff. I guess you could classify it as a technical museum, part amusement-park. We didn’t pay to go in since it was mostly little kids inside, but we got a good idea of what it was all about from peeking through the fence. They also had an free open bathroom on the outside, a much needed break.

The oldest steam powered boat with it’s original engine still in use also have Södertälje as it’s home port. During the summer you can go for a ride in this amazing boat built in 1880 at Göteborg mekaniska Werkstad. Until 1906 she was in use for transport of people and goods on lake Roxen, a little further inland. We actually passed lake Roxen with FF Harry about fifteen months ago. 22,4 meter long and 4,5 meter wide SS Ejdern takes ninety passengers and is worth a visit if you come around these parts of the world. If for nothing else to pay respect to this amazing piece of historic machinery. She does 8 knot with a 64 horsepower engine running on rock coal. 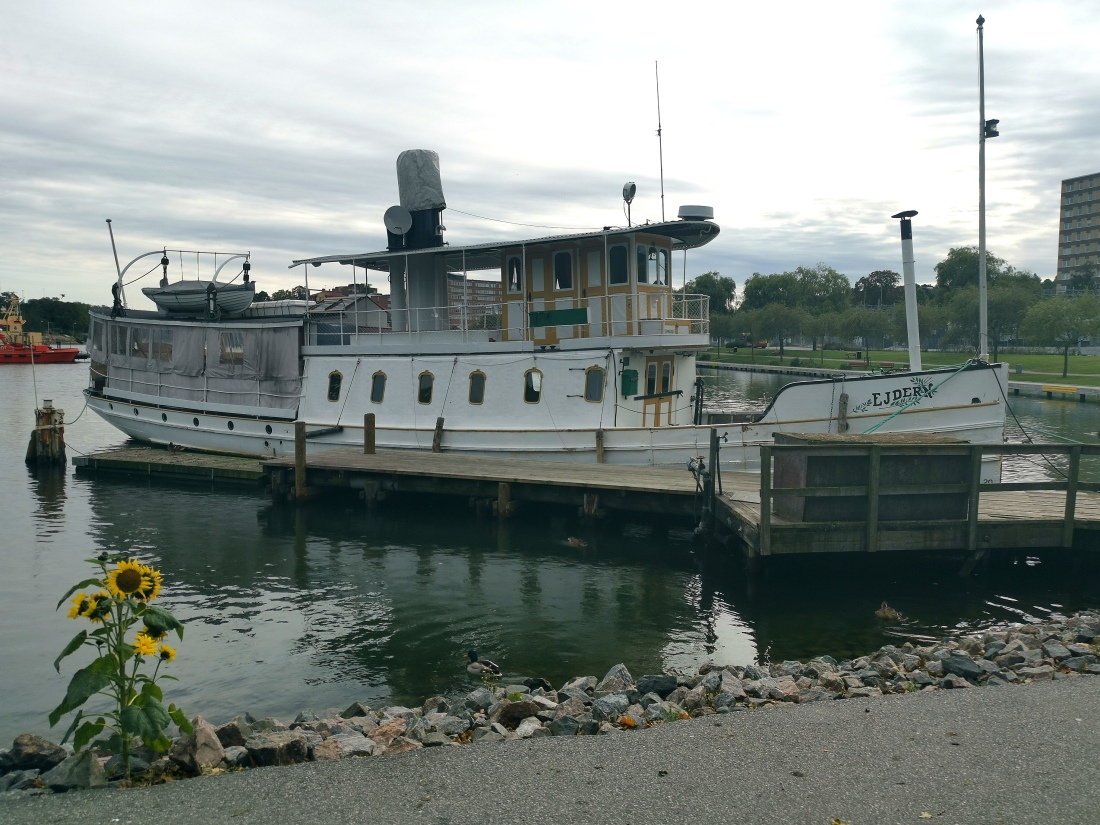 The most important issue we had to solve was our broken steam-light. That is the white light pointing forward on the boat and is one of those few things that are actually illegal not to have in order. This meant hoisting Simen up the mast and have him figure out what was wrong. Lucky for us it was another simple fix, a quick change of the bulb solved the rest of our problems. We should be officially ready to set sail again tomorrow morning.